From Assistant Chief of Police to “Yogi” – by Christopher O. Davis

If someone had told me 3 years ago that I would be a certified yoga instructor and a Yoga for First Responders Ambassador, I would have told them they were crazy!

Like most Type-A first responders, I had to experience it (yoga) for myself. Several years ago, I was going through a difficult time professionally and was ready to hang up my gun and badge. During that same time, I along with one of my co-workers decided to participate in a “yoga challenge,” which involved attending at least 20 yoga classes in 30 days. At some point, during the challenge, something “clicked.” I was not aware of it at the time, but it hindsight, yoga provided me with a way to reduce my stress to a manageable level and it gave me a feeling of “peace,” which I have learned from my good friend Doug Monda, is priceless.

In 2017, I reluctantly I started my Yoga Teacher Training (YTT) at the Guiding Wellness Institute in Fayetteville, NC. The focus of the program was “Therapeutic Yoga,” which included Warriors at Ease Training. I quickly realized that I was in the right place at the right time. Kelsy Timas offers a life-changing program that I would recommend to anyone who is interested in expanding their yoga experience. During this same time, I met Olivia Kvitne, the founder of Yoga for First Responders (YFFR) and I was very excited about the prospect of combining my newly found yoga experience with my police mindset.

Based on my newly developed yoga skills, I was eager to spread the word about the benefits of yoga to my fellow first responders. I quickly found that yoga was a hard sell to first responders, which is ironic because we (first responders) need it more than any other profession.

Since my “yoga journey” began, I have provided YFFR Training at the Fayetteville Police Department (NC), the Fayetteville Fire Department, the North Carolina Justice Academy, and The State Bureau of Investigation Academy. Without fail, after the class, I will have a good portion of the class, shake my hand and thank me for providing the unique training opportunity. I have NEVER had a student say, “that training sucked!”

As long as I continue to see that look of “peace” on my students (first responders) faces, I will continue to teach!

Lastly, the “Yogi High” is real and it is LEGAL! I hope to see you on the mat! Chris 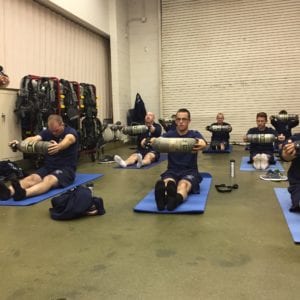 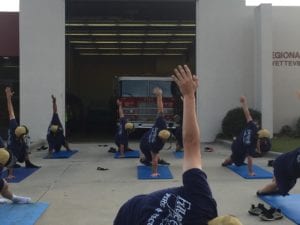 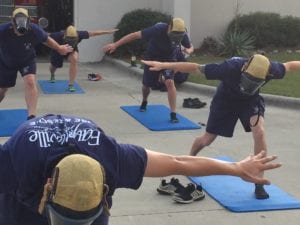 Assistant Chief of Police Christopher Davis retired this past February from the Fayetteville Police Department, in Fayetteville, NC. Many congratulations to him on a very successful career, and a heartfelt thank you for all he continues to do for first responders. 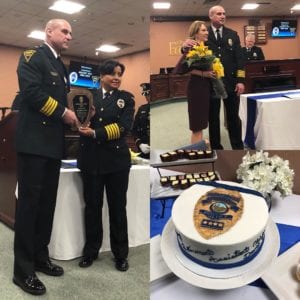